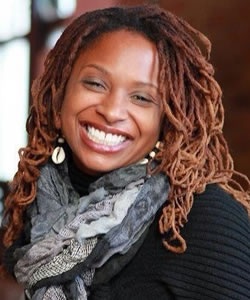 Teneé Smiley-Amico, partner, artistic director and proprietor of Amazon Braids Maui, Amazon Natural Essentials and co-creator of Our Hair Story podcast and blog. Tenee Smiley-Amico is a seasoned professional in the hair industry, with over 25 years experience in the business of BraidArt and Natural Hair Care.

Teneé has traveled to Washington DC, Atlanta, and New York City to educate and hone her craft. Although she’s learned most of what she knows from her mother Amazon Payton-Smiley a legend in the BraidArt and Natural Hair Industry, she is also trained by other legends such as Diane Bailey of Tendrils in Brooklyn and Ona of Locksmyths in Brooklyn. She has been a member of IBN (International Braiders Network), NBG (National Braiders Guild), and AHNHA (American Hair Braiders & Natural Haircare Association.

Teneé has created a signature look for locks that is well recognized around the city of Chicago. She is also the founder of Amazon Natural Look Institute and is responsible for education, apprenticeships, and certifying many lockticians in the city of Chicago. Teneé has taught classes and workshops all over the Unites States, Hawaii, Europe and West Africa her work has even been spotted in Ibisa, Spain. She has been published in the Chicago Sun-Times, the Chicago Tribune, Chicago Magazine, Sophisticate Black Hair, Essence and Ebony just to name a few. She has served as editor for Braid Magazine, Salon Profiles and Braid World. She has also served as an educator and product consultant for Soft Sheen Products, Johnson-Carson Products and Namasté Laboratories AKA Organic Root Stimulator.

Teneé Smiley-Amico relocated to Maui, Hawaii in March of 2005. Of course she left Chicago with a gigantic send off as the 2004 recipient of the Natural Hair Stylist of the year Award at the Chicago Fashion & Beauty Awards. She continues to teach classes and workshops worldwide.

Below are articles Teneé has written about the Natural Hair Industry that have been published in Urban Muse Magazine.

The Original Who’s Who in the Natural Hair Industry: The Master Pioneer Awards | Urban Muse Magazine